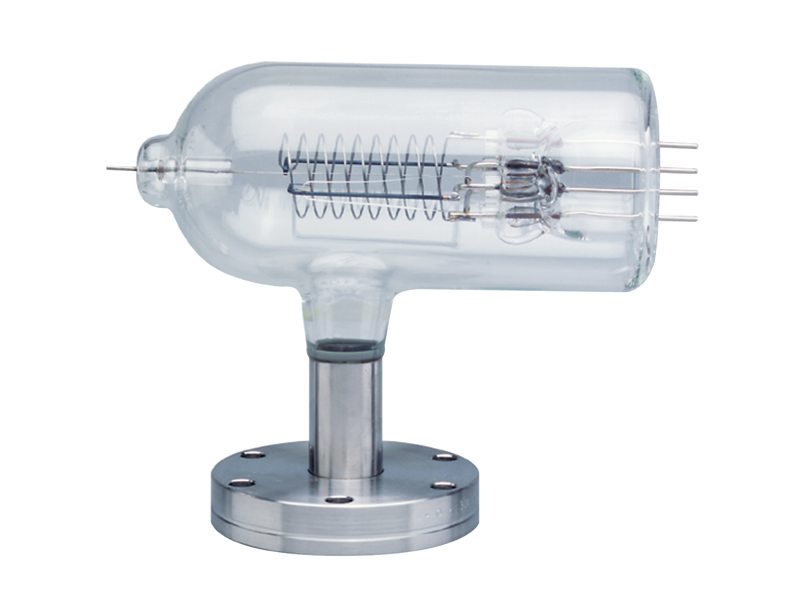 Negative electrons are emitted at a well-controlled, selectable rate from a heated filament and are accelerated toward a positively charged wire grid (anode). Electrons pass into the space between the grid and a collector wire at ground. In this space the electrons collide with gas molecules from the vacuum system, producing positive ions. The positive ions are then collected by the grounded collector wire that is located along the axis of the cylindrical grid. At a constant filament to grid voltage and electron emission current, the rate that positive ions are formed is directly proportional to the density of molecules (pressure) in the space for pressures below 1 x 10-3 Torr. The strength of the ion current is then indicated on a microammeter that is calibrated in units of pressure.

The low end of the operating range of a Bayard-Alpert gauge is determined by the X-ray limit of this type of gauge. The X-ray limit varies with different gauge designs.

X-rays are produced when the electrons emitted by the filament impact the grid and support wires. Because of the geometry of the Bayard-Alpert gauge, only a small fraction of the emitted X-rays are intercepted by the ion collector. When the X-rays strike the collector wire they cause electrons to be photoelectrically ejected from the collector. This X-ray current limits the pressures that can be measured, and is equivalent to a pressure reading in the 10-10 or 10-11 Torr ranges, depending upon the gauge model. The X-ray limit refers to the lowest pressure indication that may be obtained in a gauge when all the output current is due to X-ray induced photoemission and there is an absence of gas.

Bayard-Alpert ionization gauges have different relative sensitivities for different gas species. As a result, pressure readout provides a direct reading only for the gas for which the gauge is specified (Nitrogen). This is called a readout of Nitrogen equivalent pressure. A simple mathematical conversion of the direct pressure readout to the pressure of the non standard gas can be made. This conversion is made using the relative gauge sensitivity for the specific gas. These sensitivities are tabulated in reference material and are contained in the Granville-Phillips® instruction manual for Series 274.

Hot filament type ionization vacuum gauges work best in given pressure ranges for individual gauge designs. The following is a brief outline of the considerations relevant to selection of the proper gauge.

The sensitivity is defined as follows:

This definition makes the sensitivity relatively independent of the electron current and dependent only on gauge construction. In practice, it is often necessary to determine the lowest pressure that can be read with a given gauge tube and controller. To determine this, the lowest readable current sensitivity of the electrometer portion of the controller must be known.

Knowing the sensitivity of the gauge tube from the manufacturer’s data, the relationship for ionization current vs. pressure can be determined.

To reduce the outgassing in a gauge to a negligible level, the process of degassing is employed. For attainment of the lowest pressure levels the glass envelope gauges should be baked at 400°C for 1 hour.

The electrodes are degassed by heating to a temperature of 900°C nominally for approximately 15 minutes after baking.

The accuracy of pressure measurement, which depends on the measurement of currents as low as nanoamperes and below, is affected by leakage. These paths may be classified as either internal or external.

Internal and external leakage is held to the lowest possible value in designs such as the tubulated Bayard-Alpert. The collector terminal of the gauge is at the opposite end of the envelope from the grid and cathode terminals.

Designs which bring the collector out as one of a series of pins in a base or header are more susceptible to leakage problems than the tubulated design.

Internal leakage usually results from the evaporation of tungsten or thoria vapor from the cathode. This is controlled by means of a shield where the collector lead passes through the stem or header insulator. Great care must be exercised in insulating and shielding the lead to the collector terminal on the gauge from the controller.

The ionization gauge exhibits a certain pumping capacity. This is due to both chemical and electrical effects. Chemical pumping is due, in general, to the affinity of gases for very clean surfaces. As the surface becomes saturated, the pumping action is diminished and reaches a steady state value. Readings for a typical glass tabulated gauge will be 20 to 50 percent lower during the period of chemical pumping. The duration of the pumping may be of the order of four hours at 1 x 10-9 Torr. Electronic or ionic pumping saturates after pumping approximately three months at 1 x 10-9 Torr. The most common remedy for pumping effects is to provide a passage of large conductance between the gauge and the vacuum system.

A third mechanism of pumping in gauges involves chemical reactions with the hot cathode. A number of gases such as oxygen, nitrogen, water vapor, and hydrogen have been shown to react with the carbon present in tungsten. The ratio of these reactions are dependent on the cathode temperature, and are low enough that serious errors in measurement can be avoided when high-conductance connections are used.

In small systems, however, the change in gas composition may be significant. Several gauge configurations are available to cope with the pumping phenomenon.

Nude gauges are the best solution to severe ionization gauge pumping problems. With the nude geometry, the gauge elements can be positioned directly into the vacuum chamber, thereby eliminating the pressure differential normally associated with a tubulated gauge. The time response of this gauge system is greatly reduced as compared to the tubulated gauge.